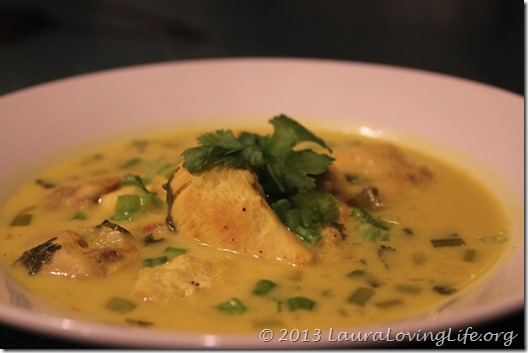 Ok I love Thai food, mostly the drunken noodle, with all its spicy flavors! As you can find on Wikipedia; Thai cooking places emphasis on lightly prepared dishes with strong aromatic components. The spiciness of Thai cuisine is well known. As with other Asian cuisines, balance, detail and variety are of great significance to Thai chefs. Thai food is known for its balance of three to four fundamental taste senses in each dish or the overall meal: sour, sweet, salty, and bitter.

This recipe has all the elements of a traditional Thai dish; unfortunately my family does not appreciate the spicy accents of Thai cuisine. With that being said, this is a Thai soup, but it is not on the spicy side, as a matter of fact it is quite the opposite! This is not a true version of Tom Kha Gai soup. However… the taste is very close to the Thai version; without the “hard to find” ingredients. If you’re a fan of cilantro I would double the Cilantro, put some in while it simmers, and put more in just before serving. If you don’t have chicken broth, water and chicken bouillon would work just as well. I added just enough Agave nectar to “sweeten it up” just a little. The Agave balances out the lime juice beautifully in this delicately flavored soup. I have yet to find lemongrass fresh, but in the vegetable section of the grocer they have it in a tube, all natural; just minced up. When you can’t find fresh this is a great alternative. The soup was outstanding and really what I would have expected for a Thai soup. Do yourself a favor…and do not smell the fish/oyster sauce. It’s rancid and repulsive! However…once mixed with the other ingredients something miraculous happens and it was beyond brilliant when all the flavors came together. My darling Husband made a suggestion that I thought was spot on, and I have included it below; he thought that some rice in the soup would have rounded it out and would give it a bit of texture that he thought it was lacking. Trust me this was a “delicate” soup as most of the Thai ones are. Although not my normal type of meal to make it was very tasty and everyone loved it. You can add straw, shitake or other types of mushrooms; Dearest daughter does not like mushrooms, so I nixed them.

You will need the following for the meal.

Cut chicken into small bite size pieces and sauté in butter for to 2 to 3 minutes until the chicken turns white. I had some bone in chicken I wanted to use, so I ended up with a mixture of dark and white meat. I think the recipe calls for all white meat but in the end I don’t think it made a difference. 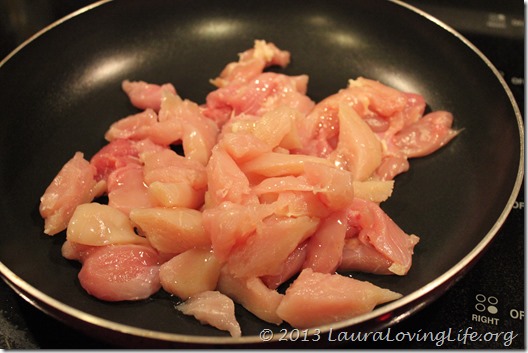 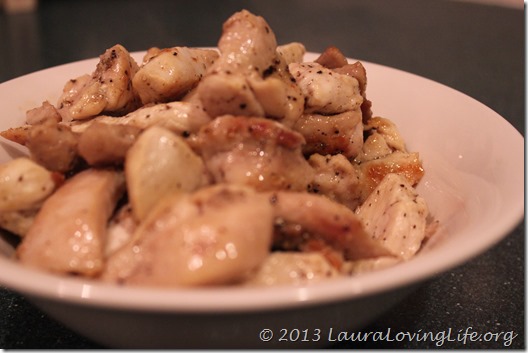 In a pot, bring coconut milk and broth to a boil. Reduce heat. Add ginger, fish sauce, lime juice, cayenne powder, turmeric and half the cilantro (If doubling the amount) . Simmer until the chicken is done, 10 to 15 minutes. Add the agave at this time. 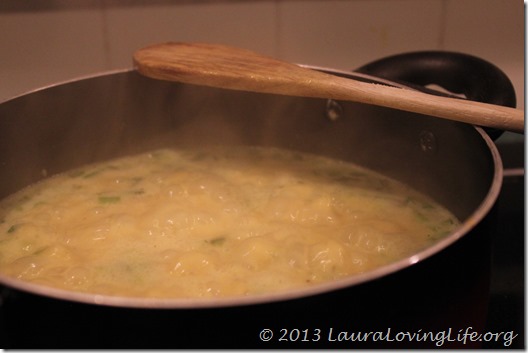 To make using fresh lime juice easier use a strainer to extract the juice, no need to worry about getting anything but that tart juice into your recipe. 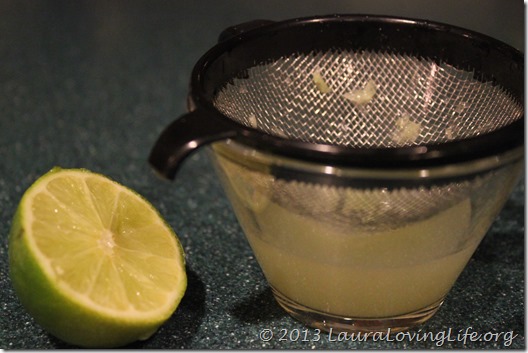 Place some rice in a bowl and serve the soup on top of the rice. Sprinkle with scallions and fresh cilantro and serve steaming hot.

I Hope you enjoyed the recipe, should you want to reach me you can do so by emailing me at LauraLovingLife@Hotmail.com 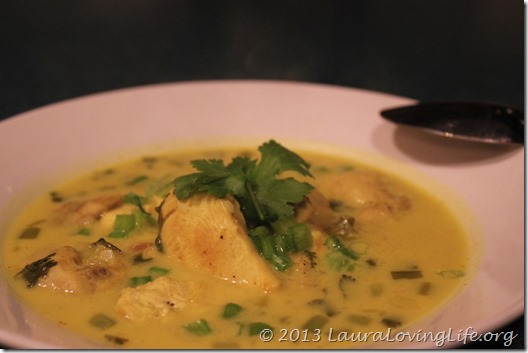