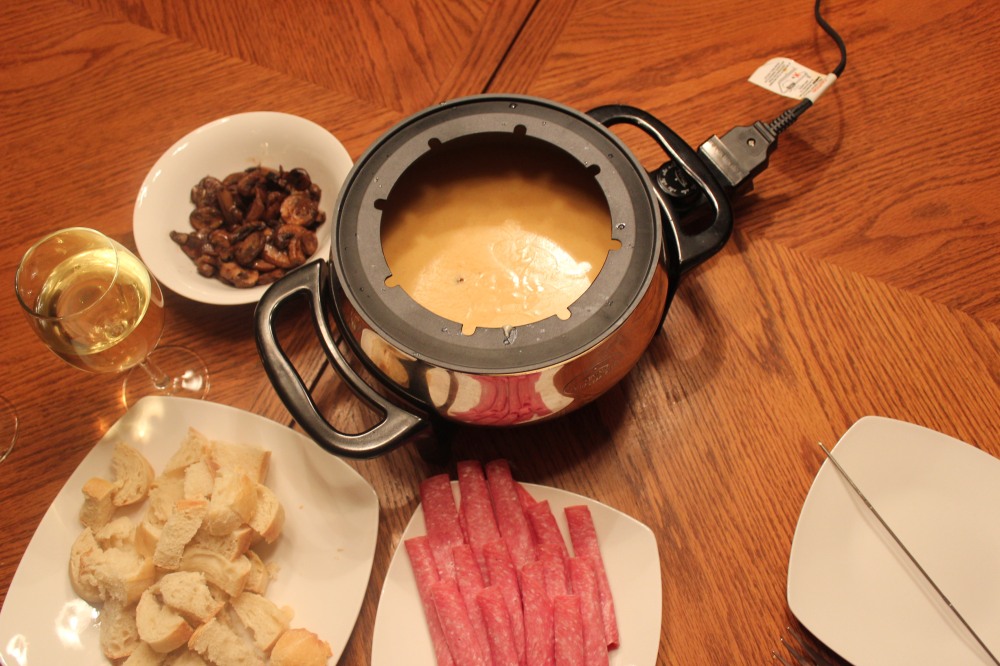 The word fondue is derived from the French verb fondre (‘to melt’) Fondue is a Swiss, French, and Italian dish of melted cheese served in a communal pot over a portable stove, and eaten by dipping long-stemmed forks with bread into the cheese. Typical fondue recipes include sharp cheeses, such as cheddar, or pungent cheeses, such as Swiss. Additional liquids in the formulas may include alcohols like wine, brandy, or sherry, which balance out the cheese flavors, and may also include creams and milks, which give depth and thickness. It was promoted as a Swiss national dish by the Swiss Cheese Union in the 1930s but its origins stem from an area that covers Switzerland, France (Rhone Alps) and Italy (Piedmont and Aosta valley).

Since the 1950s, the name “fondue” has been generalized to other dishes in which a food is dipped into a communal pot of hot liquid: chocolate fondue, in which pieces of fruit are dipped into a melted chocolate mixture, and fondue bourguignon, in which pieces of meat are cooked in hot oil. Alternatively you can use a broth to cook the meat rather than the traditional oil, healthier and adds a bit of a boost of flavor to the meats.

Back in the day when the kids were younger we loved pulling out two of the fondue pots and cooking cheese and oil, this was fun for the kids and it made for a great dinner with lots of laughter.  I store our fondue pot in the hallway closet and see it every day and after getting one for one of our dear friends we decided to do a nice fondue the other evening.

Rather than just cooking bread and dipping that we decided to get some meats potatoes and onions and mushrooms to round out the meal.  I am sad to say I did not think we needed that much but we ran out of meats and dipping assortments other than the bread before we finished.  This is a great meal to get your family to gather around the table and really enjoy their company, it is a comforting meal to me and I just love to share this easy recipe with you.

I recommend purchasing an electric fondue pot, and putting the temp just above the warm setting.  Any higher and the cheese will burn to the bottom, any lower and the cheese will congeal and harden too much. You can serve this with your favorite sliced meats (we used Italian salami sliced thin), bake a couple fingerling potatoes until soft, sauté some mushroom and onions and use those as well.  Anything you would like cheese on you can use the possibilities are endless.

*If you can’t find the above cheeses using a Swiss cheese will suffice with mild cheddar or all Swiss.

As you can see from the pictures, the cheese should have this consistency.

Use the cut clove of garlic to liberally rub the insides of a large saucepan/ pot.
Pour dry white wine into the saucepan and simmer it over a medium heat.
In a small bowl, blend the cornstarch / corn flour.
A little at a time, add in the Gruyere and Emmental cheeses to the saucepan and stir CONSTANTLY.
DO NOT ALLOW CHEESE AND WINE TO BOIL!!!  When stirring a cheese fondue, I have found it best to stir in zigzags or figure-8s, rather than circles, so that the cheese doesn’t form a ball.
When the cheese has just melted, gradually stir in the cornstarch/ corn flour.
Allow fondue to simmer, still constantly stirring, for 5 minutes or until fondue has started to thicken.
Carefully pour the fondue from the saucepan into your fondue pot, with the flame beneath set to medium.
Enjoy your Emmental & Gruyere fondue with cubes of crusty French bread, meats potatoes you could even use fruits such as apples and pears- yum!

Always start out with a larger pot than what you think you need.