Well this weekend I did a ton of cooking and baking. Have not had a lot of time to write it all down but I will work on it.  This time of the year brings the sweets out in me.  I start baking more than usual and this year I plan on sharing some of those recipes with the blogging world.

For Saturday’s meal I elected to make Bison Empanadas with a Chimichurri sauce. When Stephan and I were on our motorcycle trip cross country, we had the pleasure of eating in South Dakota and the bison meat was abundant.

We had buffalo ribs and they were to die for. The American bison, also commonly known as the American buffalo; bison meat is lower in fat and cholesterol, yet higher in protein than beef. Why would you not use this as a stable in your food pantry? Bison tastes like beef, but a little sweeter. There is less of a heavy feeling, with no game or wild taste. Bison tastes similar to beef, except it must be cooked at a lower temperature because of the lean nature of the meat.  Seeing as I have never cooked bison before and I really wanted to do something different, I looked on the internet for a recipe and came across this one. In the end it made more than we needed but the leftover were given to our son’s family and they loved it.  I changed the recipe only a small amount, I used only 1lb of bison, and I added Cajun spices.

Heat a large sauté pan, adding the olive oil to it. Throw in the onions, garlic, celery, carrots.

Sauté for 5 to 8 minutes. Add the ground Buffalo and cook until the meat is about medium (the meat will continue to cook in the dough),

breaking up with a fork while cooking. To this, add the olives, sundried tomatoes and taste for seasoning.

Remove from the stove. Cool and add in the eggs and mix ingredients together thoroughly.

Place flour in a bowl, and work in butter and lard. Dissolve salt in water and than work into flour mixture, making a dough. Let rest for 30 minutes in the fridge. 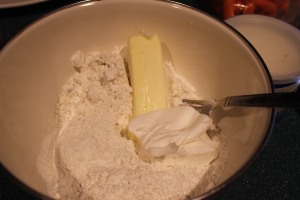 Divide the dough into 12 portions and roll each into a circle. 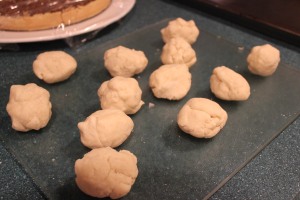 Brush the perimeter with water, scoop about ¼ cup of filling onto one side and then press the two edges firmly together, crimping if desired or lay on a baking sheet and with an end of the fork tines pressed into the ends.

Optional- brush with egg yolk and water mixture. Bake @ 400 degrees for 25 minutes or until browned. 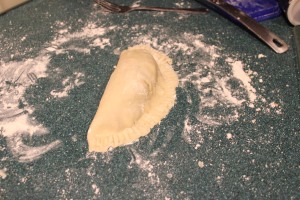 Mix the above ingredients together well, pour over Empanda’s.

In the end I used my ninja to process the sauce.  I recommend doing that!

This was very tasty, and I mean tasty. So many diverse flavors converging on your tongue; not to mention the immediate pleasure of the after taste that is left with you.  My family liked this meal, the adults more than our youngest child, I guess telling her the ingredients was a mistake.  She however ate it and said she thought it was tasty but that something was different.  So much work to do on a 13 year olds pallet. LOL I can’t complain she loves being a tester on my meals and she always tries everything. 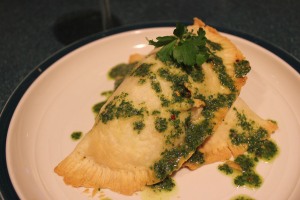 I was able to get a lot of my bison information from http://www.bisoncentral.com/.  Please make sure to stop by and gain some inside knowledge of the American bison.

Enjoy the recipe and as always your feedback is welcome.