You learn something new every day, last night I went to the store (I checked ahead of time to make sure they had what I needed this time) and was able to get the ingredients to make a tuna wrap. I was able to purchase some nice Ahi tuna; so I wanted to make sure of the quality; with all the different kinds of tuna out there, and me being new to buying a fish that you eat basically raw! In doing so I saw that some tuna is on the endangered list (don’t buy it) With Southern Blue fin critically endangered. The yellow fin is near threatened; makes you think that they should start fishing for tuna that is not on the list to be extinct.  But with that would the fish taste the same? Pacific Blue fin is least endangered, why not use this fish?  I may have to do some digging to find out if there is a big difference.  I do know that the yellow fin or ahi is a great tuna to use, with a nice buttery consistency.

Natural #1 ahi (true sashimi grade) will typically be a deep red (blood red) in color when it is nice and fresh, the longer it is out the lighter in color it will get. Turning slowly grey as it ages. Fresh Ahi will have a very light smell to it when fresh. If you purchase tuna and it has a very “fishy” smell don’t use it.  Be wary of ahi that is un-naturally pink or candy-apple red: usually marketed as “sushi grade”, this tuna typically has been treated with CO2 to set its color by stopping the oxidation process… it still goes bad at the same rate it normally would but does not look it.  I found this information online so that I would know what to buy when I went looking for this particular dish.

Either way, this is a great meal and was very tasty; you can cook the tuna and just have it with a salad rather than wrapping it.  This would be quicker if you’re short on time.  I really wanted to try wrapping it and just experiment.

What you will need for the seasoning to sear the tuna (did not measure) you could also use a premade seasoning mix, for grilling.

You can use anything to accompany the tuna in the wrap I used..

Chinese noodles (cooked as directed on the package)

Juice of one lime

And a dip, I used a sweet chili dipping sauce.  You can make your own but I just did not have the time. 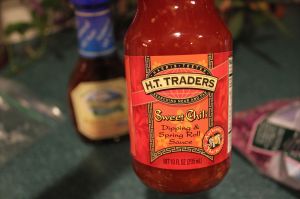 Throw some arugula, sprouts and noodles in a bowl, squeeze the juice of a lime, soy sauce (1/4 cup) or to taste and sesame seeds, a small amount of ginger and salt (again to taste) mix and allow to sit.

Mix together and press each side of the tuna into the first three spices (don’t cover the sides of the fish, just the ends that will be seared) 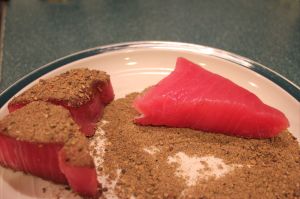 To sear the tuna you will take a non stick pan (Don’t spray the pan) and heat it on high until very hot. You will know it is hot enough when you set the tuna in the pan and you hear the distinctive sound of the fish searing. If you place it in and there is no sound it is not hot enough. 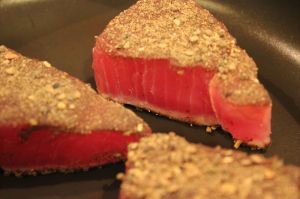 We want to sear it not cook it through, so carefully watch the tuna and you will see the color change start , turn it over and sear the other side then remove and set aside. Once cool using a very sharp knife cut the tuna in strips against the grain. 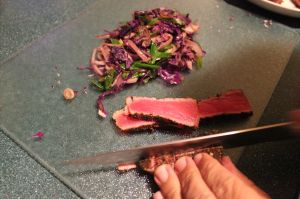 My Wonderful Husband helped me with the meal.

In the same pan, add a pat of butter, add the onions, and cabbage and sauté just until slightly tender scraping up any bits left from the searing of the fish. Set aside. 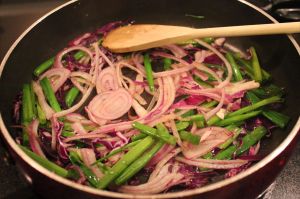 You are now ready to assemble the rolls.

Using your rice paper, which is a delicate disk that is hard until soaked in warm water for 15 to 30 seconds.  Follow the instructions on the package.  Use a tea cloth not a paper towel to pat dry and roll the wrapper.  Paper towels will stick to the wrappers. 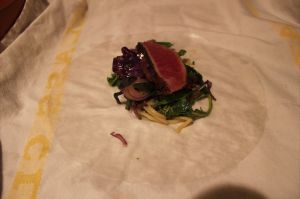 Lay out the wrapper, pat dry; lay a piece of ahi then the noodle salad and then the onion mixture. Fold the sides in then one over and roll, using your fingers to keep it tight without ripping the wrapper. This made enough for 4 people to have three rolls each. I used the noodle salad in the middle to build up the rolls. 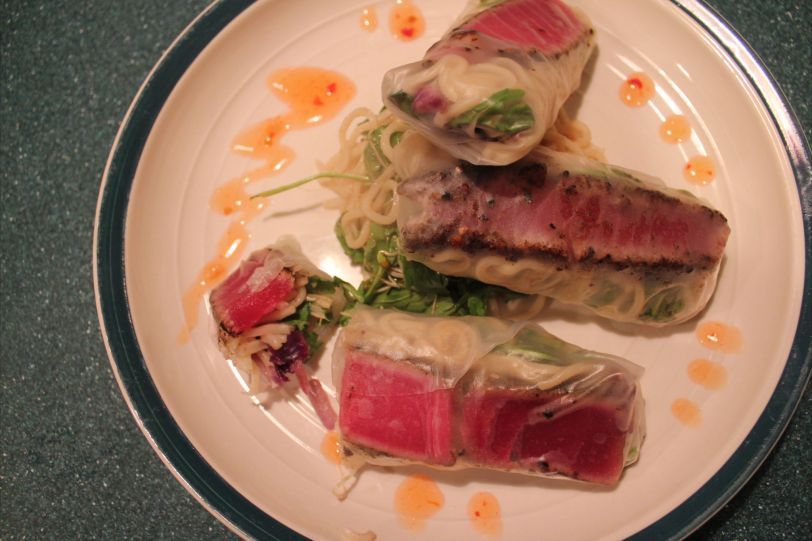 If you have never had seared Tuna I would recommend trying it. Outback Steakhouse has a very nice seared tuna appetizer.  Try that and then get to experimenting with ways to cook it at home.  When it is seared it has a really wonderful melt in your mouth flavor. The spices have a slight kick and really were nice with the spicy sweet sauce.

As always your feedback is welcome.