Ok so the weather turned on me the other day when I wanted to grill some ribs that I had intended on making. Soo I had to come up with an alternative. I have never made ribs in the oven prior to this; so this was a bit of an experiment. Everyone loved the ribs and I had no leftovers, but in the end I like the way I make them for the grill so that will be a post in the spring!

2 cups of your favorite BBQ Sauce

Take the rack of ribs and cut into smaller portions, remove the membrane from the back of the ribs. I use a pair of shears to cut into it and work my thumbs under to separate and remove the membrane. The reason to do this is so when fully cooked the meat does not stick to the bone.

Cut into smaller sizes and remove the membrane

Apply either your home made rub or pre purchased rub to all sides of the ribs.

Coat liberally with a rub

I placed all the ribs into a throw away pan and covered tightly with foil.

Place into oven and bake for 2 ½ to 3 hours. (The meat will start shrinking away from the bone.)

Remove from oven and turn broiler on high.

Cut the ribs into single serve portion, I just went ahead and cut them into each rib.

Lay on a broiler plate and cover with the BBQ Sauce, place under broiler for 2 minutes or until the sauce is bubbly and crisping to the meat.  Turn the ribs over and repeat. 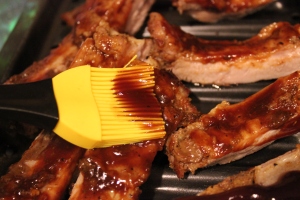 Cover in BBQ sauce and broil on both sides

Serve with pasta or potatoes, perhaps a Cole slaw. =)

I served with Orzo and a pesto drizzle.